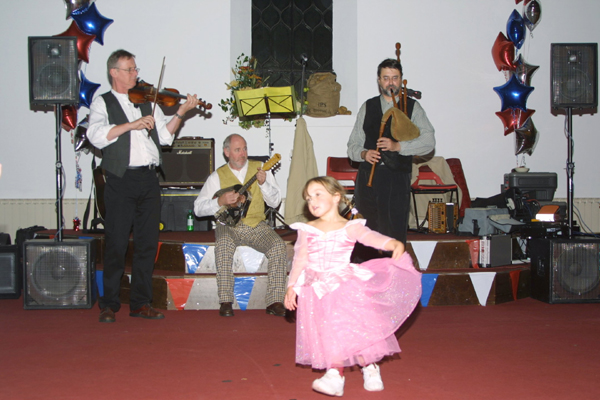 These seven tracks of barn dance music were recorded live at a wedding on April 18th 2009 - no studio tricks or enhancements, we just set up a small, portable recorder on the table behind us to record some of the tunes and dances.

As the recorder was next to the melodeon and behind the speakers rather than out the front, the fiddle and guitar do not sound as loud as they do to the audience (we balance the different volumes for 'front of house.') The aim was to provide an accurate, 'warts and all' recording . The line-up was as per picture above, apart from me on melodeon in the recordings, rather than the bagpipes.

We were joined on triangle for some tracks by an enthusiastic young guest who wanted to play along. Whilst not perhaps up to the standard of Evelyn Glennie, she had great fun and it did add to the ambience of the event. Our aim is to make your event as 'fun' and inclusive as possible.

The first tune, played before the dancing begins so we can check the volume and tone levels of the different instruments.

The guests were not quite ready to start dancing, so we played another tune.

Played for the first dance, a fairly easy circle dance to ease everyone into the evening. As you can hear, with a bit of audience participation to break the ice.

The second dance, straight after the first to keep up the momentum. But this one has the opportunity for guests to dance with different partners - again, helping to integrate the audience.

Played for a waltz. Its good to have a bit of variety in an evening, and waltzes are often popular with the older guests.

As the evening develops, we can start bringing in some more complicated dances, with more challenging figures. Half the fun seems to be getting it wrong!

Keeping up the variety, this tune was played for a 'longways' dance - with couples facing each other in two long lines. We also have circle, square and couple dances, as well as a few speciality ones.